On 12th March, all roads led to Loyola School, Jamshedpur wherein Jesuits, Collaborators and well-wishers, gathered together for the Inaugural Eucharist at 10.30 a.m in Loyola School, Jamshedpur, to ‘REMEMBER, REJOICE AND REIMAGINE”, as the Jamshedpur Jesuit Province stepped into the 75th year of its existence and collective journey in the service of people.  The Programme began with a 15-minute video clip tracing the journey from the 1850s to the arrival of the first group of Maryland Jesuits, U.S.A., with goodwill messages from Fr. Joseph O’Keefe, Jesuit Provincial, East American Province; Fr. General Arturo Sosa, putting the assembly in a thanksgiving mood, for the 75 years of journey through the passage of time. Secretaries of ‘Service of Faith’… 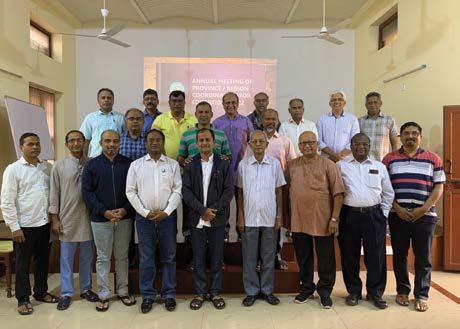 Annual Meeting of PCEs of… Annual Meeting of the Conference…