Latest News
Home /About Us

JIVAN means ‘life’ in most Indian languages, and the acronym stands for ‘Jesuits in India: Views and News’, a very fortuitous meaning indeed.

The magazine Jivan was meant to foster a link among the twenty provinces of South Asia (India, Sri Lanka, Pakistan, Bhutan, Bangladesh, Afghanistan and Nepal) in terms of information, opinion, and visual record. So not just India, but its neighbouring countries as well, wherever the Jesuits have a presence.

But not just Jesuits, Jivan features their wider world as well, through the variety of ministries and peoples that the Jesuits involve. All this comes to you through the pages of Jivan.

Under several editors, Jivan has done this every month, ten times a year, for close to four decades. In 2019, we turned 40 years old.

This service of communication [for this is what Jivan really is] has had eminent Jesuit precedents. The first printing press in India was operated by a Jesuit brother in Kerala in the 16th c., and since that time Jesuit books, maps, periodicals and leaflets have flooded the market in almost every Indian language.

More recently, Jesuit institutions in media training are among the best in the country.

Today electronics dominates the media, giving it speed, accessibility, wider impact and affordability; so Jesuits have not been slow to use the computer screen, the smart phone and the podcast to reach the most diverse audiences.

The web page, for instance, disseminates information; but it also shares opinion of every kind, and encourages quick and easy responses. All this makes for participatory communication, and so impinges on Jesuit governance.

Then again, the web page is not a print-heavy wall-paper: it comes laden with photos and graphics, sound and voice bytes, video and cinematic animation which makes for an engaging learning experience. So something must change in Jesuit formation.

The new media are the key to a new society, not always good, not necessarily bad. The principle is: discernment, always!

But one thing is sure: in interacting with Jivan online, the Society of Jesus in South Asia will re-design itself.

Let’s all hope this comes sooner than later! 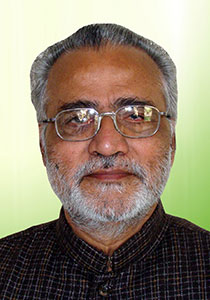 Engaged in Ministry of Counselling and Writing while residing at Seva Niketan, Mumbai.
Contact: jesyvar@hotmail.com The author lives at Campion School, Colaba, Mumbai, where he is writer-in-residence. Contact: pereira.myron@yahoo.in The author is currently Director of IISR (Indian Institute of Science and Religion) Delhi and Professor Emeritus of Jnana-Deepa Vidyapeeth, Pune. Contact: jobksj@gmail.com